This evening I was overjoyed and full of pride to see my high school friend and fellow Crusader, Casey Kamaka (along with his family business, Kamaka Hawaii, Inc.) featured in a PBS Hawaii television special,

As anyone watching tonight’s special can attest, in addition to being the luthier (a luthier is someone who makes or repairs stringed instruments), Casey is a great communicator. Moreover, to this day, he has a characteristic stillness about him and is very soft-spoken. However, as a football player he was quite menacing and his toughness spoke loudly, yet he remained very humble. In a similar manner, he lets his tremendous skill as a fine ukulele maker speak for itself in the final product—a world-renown ukulele.

As the longtime makers of the world’s finest ukulele instrument, he never bragged about it back in the day. In fact, I don’t recall him ever saying much about his family’s iconic business. He didn’t have to, his name said it all. When I think about it, I knew about his family business before I knew him as a person. Growing up on Maui, I still remember what it took in 1977 for our family to buy a Kamaka ‘uke’. I remember us going to Long’s Drugs in Kahului to buy my older brother, Milt, his first Kamaka. At the time, it was a whopping $175! This was during the uke’s renaissance in the 1970’s, where public schools on Maui were using the instrument to provide a teaching moment to island students (as a side note, it is said that music education improves math skills). Whatever the case, all I can remember is that it was the rage (or as the kids say today, “the bomb!) back then. In recent years, the world has embraced the uke.

In 1993, I attended an after-work function at the Hawaiian Chamber of Commerce as a guest of one of its members, Warren Asing. When we entered the venue, we were sold raffle tickets. At the time, I was hired as an HR consultant for Fernandez Entertainment, where Warren is a highly respected Executive Vice-President in charge of the Fun Factory division. Upon showing up at their place of business the very next day, Warren approached me with a large, tenor-sized ukulele case. He explained, “after you left last night, your name was drawn in the raffle…this is yours. You won it!” While I was excited about this $1000 uke; he was ecstatic about what it was. It was gorgeous. The yellow fur-like felt that this koa gem sat-in made it look even more regal. I was perplexed: how did I win? I was fortunate but clearly, his uke stories demonstrated that he valued it beyond measure. In a split-second decision, I turned to him and said, “This is for you. Thank you for all you have done for me…” Initially, he thought I was being facetious. After he knew it was real; he explained how this fine ukulele would become an heirloom in their family; he already had a place in his Aiea Heights home set aside for it before it even got there. Knowing how meaningful it was to him made it all worthwhile for me. I made the right decision. 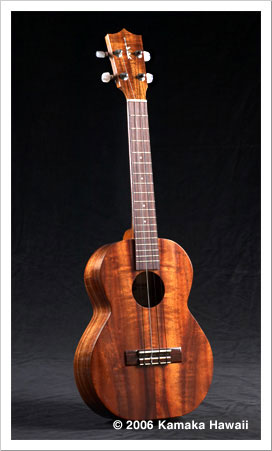 Like the Asing’s, Hawaii people cherish the ukulele. But more than any other, it was a Kamaka ukulele. And the Kamaka family legacy is inextricable intertwined with this musical instrument. His grandfather  apprenticed with Manuel Nunes, the Portuguese man who first introduced the instrument to the Islands. Today, Casey, his brother, Chris and his cousin, Sam, Jr. have now taken over control and run the day-to-day operations. They continue this fine manufacturing legacy of ukulele-making and other young Kamaka’s are also chipping in with the business, carrying on the tradition well into the fourth generation.

Casey’s forte is building custom pieces. As one of the last master ukulele craftsman, he focuses on the high-end, custom orders at Kamaka Hawaii, Inc. In a Honolulu Advertiser article, Casey stated, “In Tiny Tim days, it was thought of as a toy. But now as entertainers go out and share their styles people really believe it’s a musical instrument.” Case in point:He was the person responsible (or should I say “instrumental”?) in creating “the Jake,” an ukulele model for virtuoso Jake Shimabukuro.When asked recently about Casey’s prowess, Shimabukuro said, “He (Casey) put’s life into every instrument he builds…”

Here’s wishing the Kamaka ohana another century of fine ukulele-making. May they continue to be the gold standard in producing this truly Hawaiian instrument, and in bringing such beautiful island music to the world.